I wrote a post about some roses that I had in the house a little over a week ago.  Then I kept the flowers until well after their scent had faded.  As you can imagine, it was so that I could get some photos.  Here is one that I shot a few days ago: 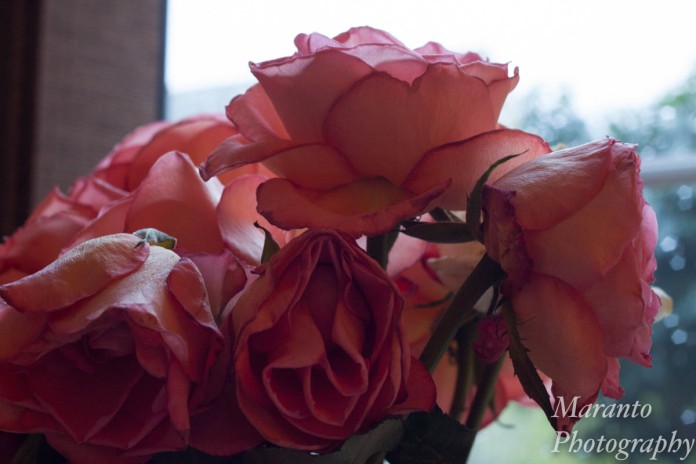 What I was thinking about was light. I knew I wanted to shoot in the early morning light, to take advantage of that lovely tinge of the first light of the day.  In this case, my tripod was mandatory, you see the exposure time of two seconds? there is no way for me to get a clear shot while holding the camera.  So, with my camera set up on the tripod, I worked a bit with my f-stop.  I wanted the roses to be fairly in focus, but I wanted the raindrops on the window behind to appear as bokeh.  F/8 was the answer for this photo shoot.

So then to the editing, cropping was my first step.  I then created a color version and this black and white version:

You can see that I have cropped out the left side of the photo, just a bit too much going on there in my opinion. The slightly warm tint to this version I got by sliding up the temperature slider in Lightroom.  I’ve also added a bit of grain to this version.

With both a color and black and white version created, from Lightroom I opened them as layers in a single file in Photoshop.  Here is the final version of that experiment:

To achieve this look, I have the black and white version as the top layer but I have lowered its opacity.  I did trying adding a mask to add in more color to the roses, but ended up not liking the effect.  The original color of the roses seemed garish against the more muted background of this combined version.

What do you think of my versions? I added both the black and white and the combined version to my portfolio on Picfair. I like them, does it bother you that the roses are not their original color? have you ever tried combining black and white and color photos? the result can be lovely or jarring, it is interesting how varied the outcomes can be.