If you are ever at Hampton Court Palace don’t forget to look up. The Astronomical Clock, an imposing, functional work of art, was installed in 1540. Other than the time it also indicates high tide at London Bridge.  That’s important if you are traveling by barge, as many members of the court at the time would have been doing. We used the car park; just one way in which times have changed since the clock’s installation. 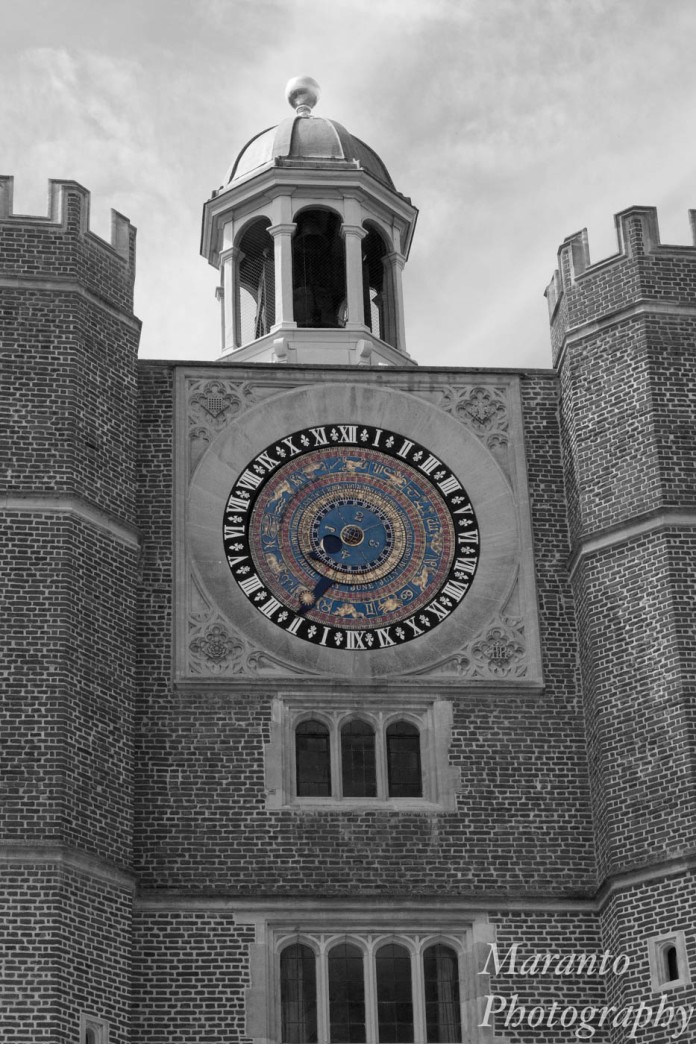 While touring the palace I was using my Canon 50D with a 50mm lens.  The challenges that day were the rain and the fact that I was taking photos indoors and out. One thing that my camera does well is allow for a high ISO and a resulting photo that is not too grainy; in this case I set my ISO high so that I could change my shutter speed and aperture frequently. I brought home a lot of images, but I really found the clock facinating. You can see in my final image I have combined black and white and color.  Here is where I started:

One of the first things I did was to crop the image using the straighten feature in Photoshop.  From the angle which the photo was taken, I think it is natural for it not to be 100% straight, but I wanted it straighter than the way it had been shot.  I also sharpened the image.  I mention these two steps because they are often my last two steps, but this time were my first.  I then created a second layer, making it black and white.  The black and white copy on top, the color underneath. I allowed Photoshop to make the black and white by clicking Image-Adjustments-Black&White. This will make default adjustments but also pops up a dialogue box that will allow, via sliders, the user to adjust the various values of the image. I like to start with the default, but it rarely matches exactly what I want to see.  In this case, it was the sky, there was no detail in the default, but the sliders helped me fix that.  Then I added a layer mask on the black and white copy.  In the layers panel there is an icon with a  rectangle with a circle in it, that will created the mask.  I then used the paintbrush tool and painted over the face of the clock which revealed the color layer beneath.

I really like the result, but what do you think? The black and white brick really makes the color of the clock face stand out in a way that I like. Do you mix black and white and color in your editing process? Do you like the results you get?  I find that it is a bit of a mixed bag, sometimes it works really well other times it is a complete miss. I also have found that I have to go ahead and try it, I can’t always tell just by looking at the original image if it is going to work.  Do you have an editing technique that is like that for you? sometimes it works and other times it is a mess?  Feel free to leave a comment below.