Something that I’ve found fascinating since I was a child is the ability of the planet to transform itself.  The idea that a volcano can change the course of human events is humbling, a reminder that we can’t control everything.  That’s what I was thinking when I shot the photos that would become this image: 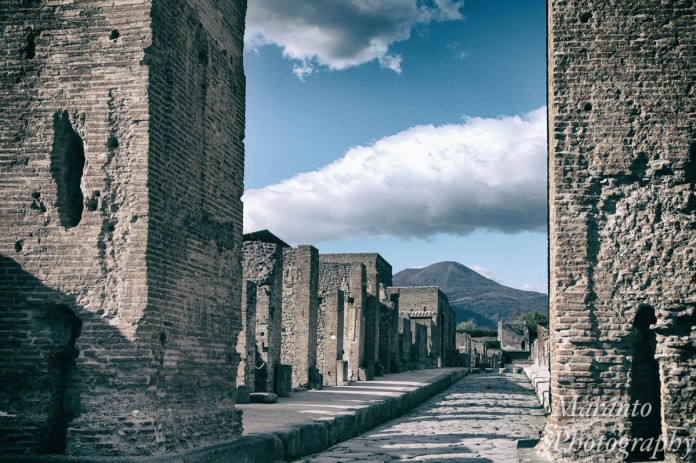 That’s Mount Vesuvius in the background and the excavated town of Pompeii in the foreground.  I knew a bit about the history of Pompeii before my visit but one thing that I didn’t know, or had forgotten, was that when the volcano erupted in 79 AD it added land to the area. Pompeii use to be the port, now the port is further away.  As for the photo, it went under a bit of a transformation as well.  I started here:

This photo above is one of three shots, identical except for their exposure value, that I combined into one photo, making an HDR version.  From there I cropped the photo. There was quite a bit in the foreground that keeps you from moving to the back of the photo and the lurking volcano. Then I thought about the mood of the photo.  I wanted to express the indifference of nature to the ambitions of man. To achieve that thought, I removed the people in the photo with the healing brush tool. Seems a bit ironic. Then I put a cool toned filter on top of the photo and darkened the edges a bit to help draw your eye to the volcano.

I thought the outcome made for a more interesting photo but what you think?  Have you ever been to Pompeii?  For me, it was one of those places that I have always wanted to see and it did not disappoint.  Feel free to leave your thoughts in the comment section below.