One thing I love about rain is its ability to change the mood of a photo, adding interest almost immediately.

I saw this scene and felt that the little bit of yellow would make an interesting contrast to the other earthier tones in the photograph. The yellow also lit up the raindrops a bit, helping to highlight them even though they were tiny.

To get this final result, I used exposure bracketing while shooting.  I then combined the three images, identical except for their exposure values, and combined them into an HDR version of the photo.  That might seem like a lot of effort for one photo but it really brought out the detail in the raindrops and the richness of tone that was available in the yellow.

Have you ever taken extra steps in processing what looks like an ordinary photo to uncover additional beauty?  I like the stillness and moody tone of this image, what do you think? To me, the mood is almost more important here than the subject matter. A version of it has also been added to my Picfair portfolio. Feel free to leave a comment below.

For several days it has been pretty cold here.  We have a bit of snow on the ground that is just hanging around, so I used it to make this photo: 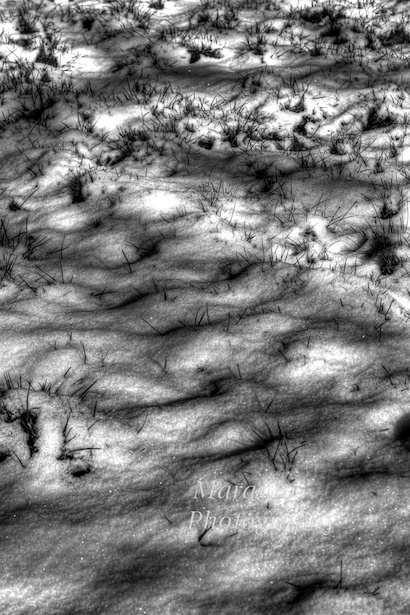 This is the edited version, see the other photo for exif data

Here is the original photo:

While I was shooting I was thinking that I was going to do an HDR version, so I was shooting using a bracketed exposure.  I did use a tripod as well. The original photo that you see above is my middle exposure, so I had a lighter and a darker image as well.  I used those three in Photomatix to make the final image.  I also used a fast shutter speed to deal with the wind that was moving the grass a bit.  I set my camera to a low ISO and used “shade” as my white balance setting to get a better white color and detail in the snow.

I had in mind that I wanted to create a black and white photo that was a little bit abstract. When I loaded my bracketed photos into Photomatix, I felt that the black and white artistic setting was closest to what I was after.  I put the HDR version I created back into Aperture for some final editing.  I cropped the image and also sharpened it a bit.

Feel free to let me know what you think in the comments section.

We have a couple of bird feeders outside of my office window because I enjoy watching them come and go.  Here is a photo I took the other day: 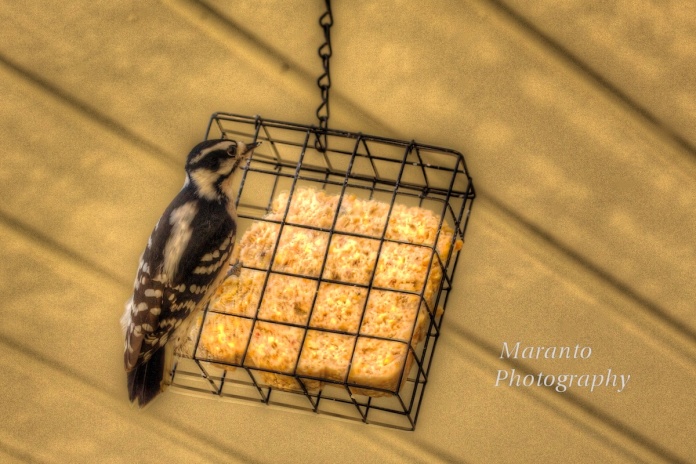 To get this photo I set up my camera with a remote shutter on a tripod and went back inside.  From my office window I could see when this Downy Woodpecker landed.  I was shooting bracketed exposures.  For this particular image I used Photomatix to combine them and then used one of the painterly settings because I thought that helped the bird stand out a bit from the background.