A while back I blogged about this photo: 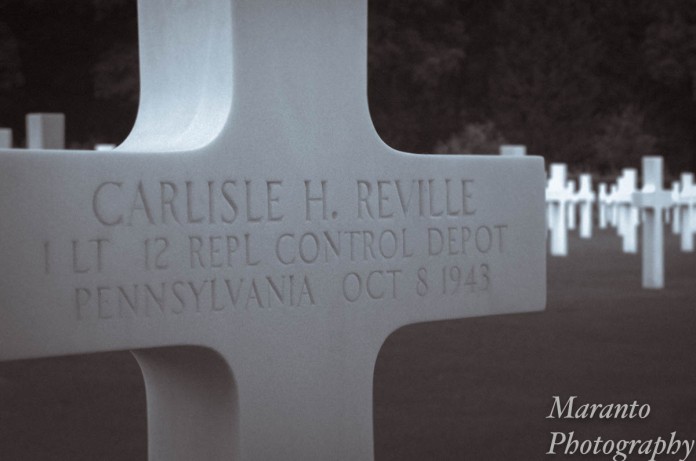 Based on what I could find online, a few things like his name and date of birth didn’t seem to add up when you looked at this grave marker.  So I went back to the Cambridge American Cemetery and Memorial. The staff member who helped me was a bit surprised that I wasn’t researching a relative,but was more than happy to give me a hand in my research.  It ended up being pretty simple.  The Carlisle H. Reville whose grave I photographed, was Carlisle H. Reville Jr.  My search had been further complicated by the fact that the 1930 Census record was handwritten, and the later data entry spelled his first name wrong.

It’s easy to see why a mistake was made.

So, on the data entry portion of this page, he is listed as “Caulislo”, easy to see why.

In the course of my research I found out that Reville Sr. had served in WWI.  I also found out that Reville Jr. had first been buried at another cemetery but was moved here when this cemetery was established.  What I can’t find is a decent lead on the family, other than they were living in Pennsylvania in the 1930’s and 1940’s.  If you happen to know this family, I am more than happy to have them contact me if they would like a digital copy of the photo I have taken of their relative’s grave.

Since I was back at the cemetery, you know that I took some more pictures.  Here is one from that day:

The edited black and white version

I’ve edited this in Lightroom and using a black and white plug-in.  I’ll post the original below, but one of the first things I did while it was still a color version was to bring out detail in the shadows and increase the saturation in the blues and the greens.  It looks horrible in that state, but once it is converted to black and white it looks good again. Here is the original file:

The subject is well suited to black and white I think.  I’ve included it in my portfolio at Picfair. Somehow the color version just seems to vivid for the subject matter.  What do you think?  Feel free to comment on my new photo or on the follow up from my older post.

Sometimes a blog post is a few weeks in the making. This is one of those posts.  It started a few weeks ago with a visit to the Cambridge American Cemetery, the final resting place for almost 4,000 American war dead from WWII.  On the grounds there is also a very well done visitors center.  I spent some time looking around the cemetery and took this photo:

Actually, it is a very edited version of this photo:

I cleaned the marker a bit and patched up the grass around it.  I did both of those things using the healing and cloning tools in Photoshop.  I also cropped the image and put an iris blur filter on it.  The filter was mostly to blur the trees in the background just a bit more than they were in the original photo.  I then switched to Lightroom and converted it to black and white, applied a graduated filter, added grain, and a split tone effect.

That’s more effects and editing than I typically do.  As I was working with this photograph I couldn’t help but think of this particular person and was just curious to know a bit about him.  My first thought actually was to wonder if his family in the US has a photo of his grave marker, and if not would they want one?  I went online to see if I could find any information on him. A search of Carlisle H. Reville returned a synopsis of his death. I then found copies of the 1930 and 1940 US Census records that list him.  The 1940 census gives his name as “Carl H. Reville”, but based on the other family members listed, I believe it to be him.  If this is correct, this is where I think the story gets odd. Carlisle would have been 48 if he died in 1943.  His record at the cemetery indicates he was a pilot and 1st Lieutenant.  Census records indicate he was a salesman.  To complicate matters, his son Caulislo H. Reville, is listed as 13 years old in the 1930 census.  I can’t find him in the 1940 census, but he would have been 26 in 1943, a much closer fit for a 1st Lieutenant in WWII.  It just has got me thinking, I’m wondering if it’s possible the names are wrong?  I can’t even tell you exactly why this bothers me, but now I’m on a bit of a quest.  My next stop will be back to the cemetery, to see if I can find out how old Carlisle was at the time of his death.  If he was indeed 48, I’ll think he was a bit of an outlier for his rank, but that does happen.  If the cemetery doesn’t have the information, I’ll be back online to try an find out more.  An interesting note, US Census records from 1950 will not be made public until April 1, 2022.

If you are still reading, what do you think? do you agree Carlisle’s age seems a bit off for the situation?  Have you ever taken a photograph and then found out you had a lot more on your hands than you realized? Do you like the edits?