I love that Ailsa at Where’s My backpack? picked pale as this week’s travel theme.  I generally love bright vivid color or the drama of black and white, so it was fun to look for some pale images.   The photos I have chosen I took at the City Museum in St. Louis, Missouri.  If you are a photographer looking for a bunch of unique things to photograph under one roof, you should check it out.  I will say this though, it is a busy place, so maybe go early. 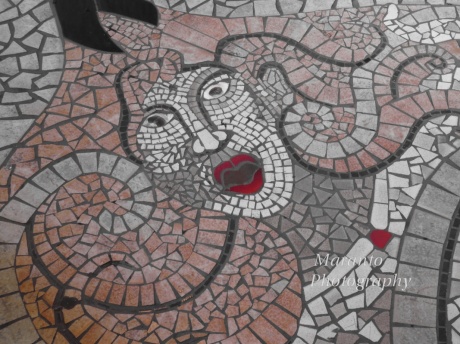 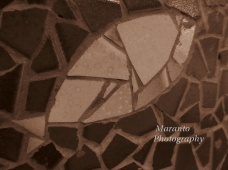 I take more photos with my Canon 50D, but for these photos I was using my Canon Powershot ELPH.  To be honest, that day I had both cameras and used both, but for these photos I was interested in trying some of the settings the Powershot had to offer.  The fish mosaic was shot using a sepia tone preset.  The stone statue I used a blue monochrome setting.  The female face mosaic I used a color picker setting to accentuate the pale reds and make the other colors more monochrome.  I was happy with these particular shots.  Another thing that I was happy to see was the relative lack of noise, despite the higher ISO, 1600, in two of the shots.