Date and Location of Photo: May 28, 2018. Dieppe Canadian War Cemetery. I have published several photos from my time along the Normandy Coast. This one is a detail shot from the Dieppe Canadian War Cemetery, which is a bit off the beaten path on a small, quiet road that has several fields nearby. A spot worth seeking out. The Cemetery is well cared for, beautiful and sad.

Thoughts on the Edit: I wasn’t sure if the square format was going to work with this particular file, so that was a bit of an experiment. Once I decided on the crop, I then boosted the details and luminance before adding the Luminar Look, Expired L11, which is an expired film look. The look has a texture overlay which is a bit too strong in my opinion so I edited that part of the look.

When Becky announced that the April Squares theme was going to be “top”, I thought it over and then sent her a message, then pitched my idea. She was open to my theme within the theme and the result is my response to the April Squares challenge.

I move a lot and I have a move pending. I’ve lived here in England for about four years and will be heading to the United States. Exact dates to be determined, given the current world situation, details have yet to be worked out. My April Squares is a “top shots” reflection on the last four years. Each square represents some moment or place that was meaningful to me. They are in chronological order moving forward in time. I’m attempting to post every day. All photos will be edited in Luminar 3. I hope you enjoy following along, I’ve enjoyed the process of creating. Your comments and thoughts are welcome below. 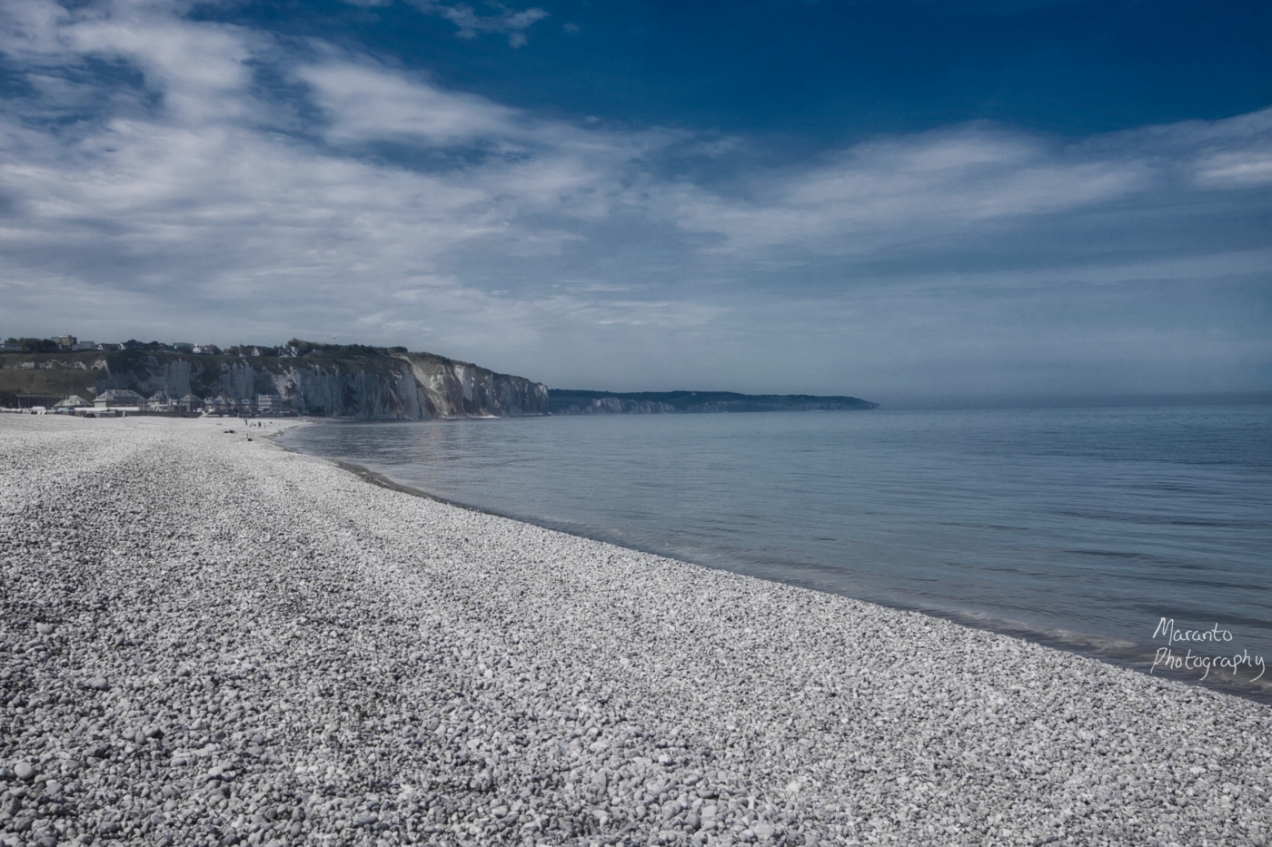 This week I was working on learning something new.

I began with this file:

And a webinar that I was watching which is now archived here. The webinar is about creating a black and white image in Luminar.

Here is my black and white edit: 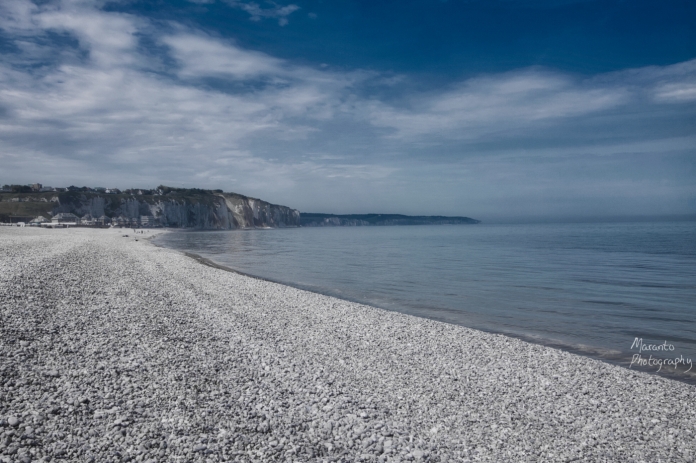 No need to adjust your screen. No, I am not kidding about what I wrote above but yes, I am aware that is a color version of my photo.

I’ll take a couple of steps back. The first thing I did was crop the image a bit. Then I used the eraser tool to get rid of whatever that is in the lower left side of the image and a few of the people that were on the beach. I wanted to create a nice expansive space in the foreground of the photo.

This next screenshot shows that plus my next step which was to drag the luminance sliders around. Making the blue low and the yellow high created the deep blue tones while leaving the stones nice and monochrome:

I was pleased with the way this experiment turned out, but what do you think of the results? Feel free to leave a comment below.

Usually, when I think of landscape photography I think of sweeping vistas devoid of people or man-made elements. But not always, so when I saw there was a photography challenge up this week where “landscape” was the theme, I thought I would consider something that had an obvious human footprint.  At the moment, I am working on processing photos that I took in Normandy, France. I have a lot of beautiful coastline shots. Normandy is a beautiful area, but obviously, it’s history includes that of WWII. I will be posting a photo in a few days of the coastline of Dieppe, in Normandy, but first I edited these photos from the Dieppe Canadian War Cemetery: 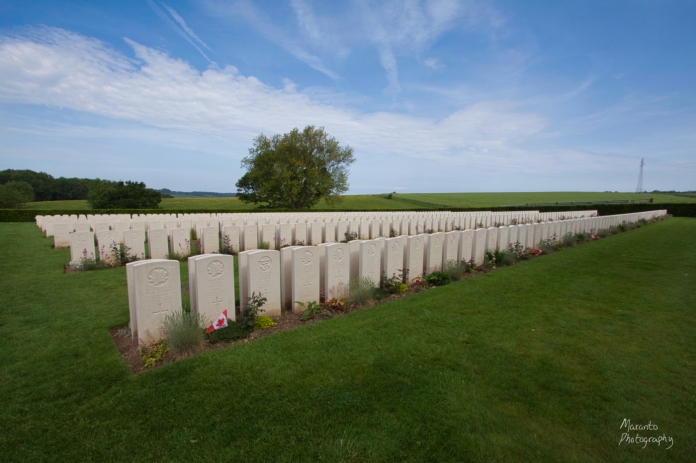 This first shot is shot at the widest angle, to show as much of the landscape as possible. It’s been edited to give the colors a bit of a boost and a bit of clarity. This second shot is edited in much the same way:

To take this shot, I brought the stones into more detail by both taking a step closer and by bringing my lens from 10mm, which would have shown more of the scene, to 12mm, which shows less.

With these two shots, I was hoping to convey the reality of what this cemetery looks like. Most of the soldiers buried here are Canadian, the rest are British. The soldiers laid to rest here were killed in the Dieppe Raid of 1942. It was a disaster for the Allied Forces and while not all of their casualties were left behind, a lot were. It is interesting to me that this cemetery was created by the Germans, see the back to back stones of the first rows? that is typical of a German style of burial. Perhaps more interesting is that when the war was over, this cemetery remained here.

What I’d like you to know if you’re Canadian or British and have a family member or countrymen interred here and you aren’t able to visit, the Germans picked a beautiful spot to bury your loved one. I hope that my two pictures convey a sense of the beauty of the landscape here.

Which brings me to my third photo: 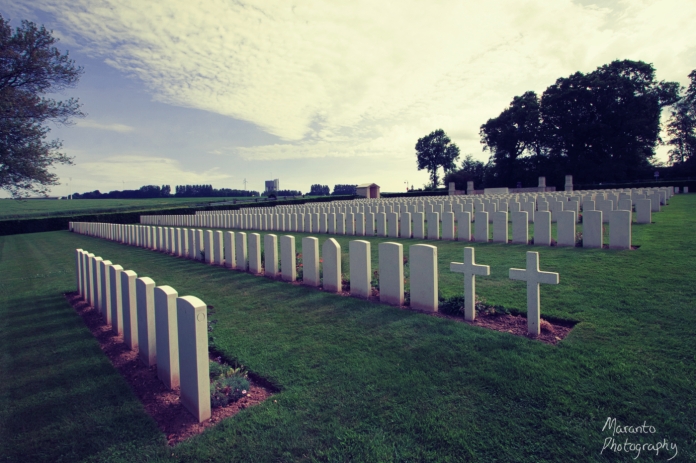 This last edit is where I am trying to process what would have been the terror of the raid with the beauty of the land itself. To shoot this idea, I decided to shoot from behind the stones and into the sun. The filter I applied to this had a red tinge to it. The red for the heat of battle, blood itself, confusion, anger and hatred, and the red prominently in the Canadian flag. It’s a lot to try and sum up in one image.

Cemeteries are wonderfully complex places to me. I hope that I have conveyed some of that in these images. What do you think of my edits? Your comments are welcome below.