This week’s assignment in Design class was actually three items when it was all said and done.  You will see them below.  Two I did using photography and the third is a painting.  The assignment was this, create a microcosm in collage format.  Then translate that to black and white and as many shades of grey as you like.  We were also permitted to use one color if we chose.  First I made the collage.  I used many photos I had of birds, particularly owls, and then combined those with a picture of my older child.  A representation of part of that child’s world.  I made a black and white version and a color version to help me make the decision regarding the use of color in the final painting.  Here are the two collages:

Collage in Black and White

I used Aperture, CollageIt, and Photomatix when creating these.  CollageIt was a free app that I found at the App Store.  Using that I was able to combine the photos I had in mind from Aperture.  It is a pretty straightforward app.  If you are looking for a free, basic, app, it is those things, and it was very helpful for this project.  Then I made three version of the collage to put in Photomatix.  That was helpful in accenting the texture in the collage.  I created a color version and black and white, then put both back into Aperture for some final tweaking.

I decided that I liked the black and white version better.  I also decided that I wanted the final painting to be vertical instead of horizontal.  I used black white and five shades of grey.  Here is the painting:

So, what do you think?  Have a favorite? question or comment?  leave them below in the comment section.

Using just one light source to create a photograph can be a fun challenge. You could take it as a chance to wonder what is lurking in the shadows.  Anyway, I was trying it out the other day and I here is what I came up with: 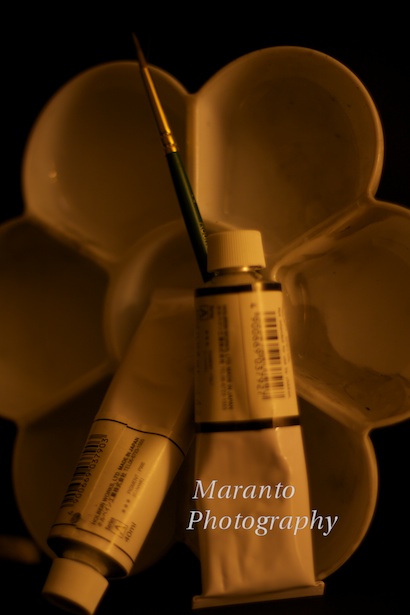 My art supplies, one light, and a tripod.