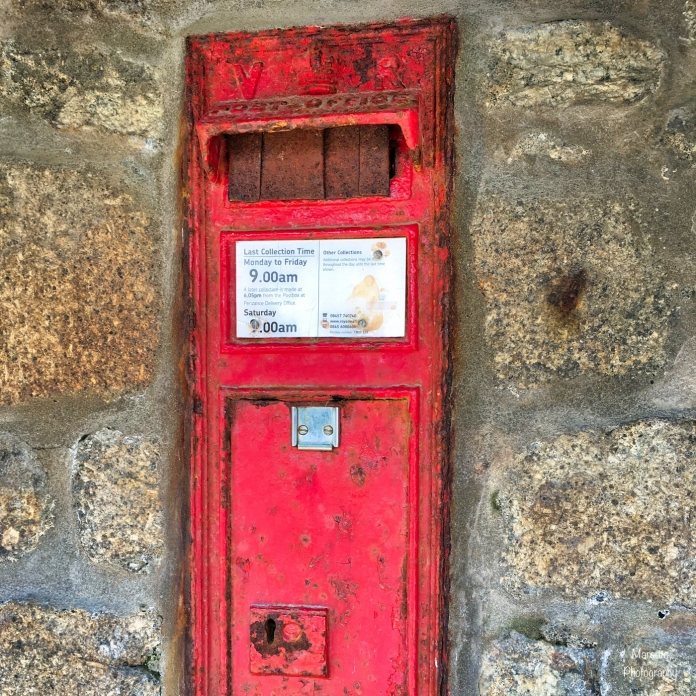 Date and Location of Photo: April 10, 2019, St. Michael’s Mount, Cornwall. St. Michael’s Mount is a National Trust property, an island that is beautiful and scenic. Usually photos from the area are more like this one. But it also has this postbox! It’s a Queen Victoria cypher, a monarch whose postboxes are still fairly common and in use today. I developed a bit of an obsession for postboxes in my four years here, going as far as to make a trip into London to locate a rare, still in use, Edward VIII box. A replica Elizabeth II box, a Christmas gift, will be our new postbox once we move and get it installed.

Thoughts on the Edit: This postbox has a lot of character having been exposed to the elements for years, so I kept the edits pretty basic. In a nod to its location, I’ve used the Luminar Look, A Day at the Beach.

When Becky announced that the April Squares theme was going to be “top”, I thought it over and then sent her a message, then pitched my idea. She was open to my theme within the theme and the result is my response to the April Squares challenge.

I move a lot and I have a move pending. I’ve lived here in England for about four years and will be heading to the United States. Exact dates to be determined, given the current world situation, details have yet to be worked out. My April Squares is a “top shots” reflection on the last four years. Each square represents some moment or place that was meaningful to me. They are in chronological order moving forward in time. I’m attempting to post every day. All photos will be edited in Luminar 3. I hope you enjoy following along, I’ve enjoyed the process of creating. Your comments and thoughts are welcome below.

This post is going to be a bit of a departure from my usual style. I was off on a walk yesterday and I am inviting you along on a bit of a recap of the day.  I was in London for the day. Friends were passing through London and this was the day that our schedules intersected. They would be available in the afternoon, but I decided to make a full day of it. I am the kind of person that makes lists. For everything. One of my lists is “Things to do in England”. When something catches my eye, it goes on the list. Since I had a morning in London, I decided to do two things that were on the London section of the list. I’m also a bit of a history  buff, so on the list were a rare King Edward VIII postbox and St. Etheldreda’s Church.  I took the train to King’s Cross and then headed here:

The iconic London Underground. I happened to be standing with my back to this wall and then thought, that would be a fun photo. It was shot on my iPhone. The underground deposited me near to this:

It’s a King Edward VIII postbox I tell you rather excitedly! and if you are anything like the rest of my family you chuckle, nod politely, and wait for me to take the photo. This one was taken with my point and shoot. Postboxes with a King Edward VIII cypher are rare because he was King for less than a year and then a lot of his postboxes were either modified or replaced. It took me a fair amount of digging to locate this one that I could visit, ultimately I tracked it down on Instagram, so it seemed only right to post this version, shot with my iPhone and edited in Hipstamatic, there:

From there I went to find St. Etheldreda’s Church. It is one of the oldest Catholic Churches in England and the structure itself is one of two in London that dates from the reign of King Edward I. It has a rather interesting history but it was built sometime between 1250-1290 and it was set to its current form and function in 1878. I was told of existence about a year ago and assured that it was well worth my time to track down if I had the opportunity. Wow, was it ever:

This first shot, taken shortly after a Mass, shows the beautiful interior as well as the haze from incense used in the Mass.

Then there was the stained glass:

Both of these shots were taken with my point and shoot. Set back from the main road and tucked in between more modern buildings this church was a beautiful highlight of my day.

If you are wondering why I didn’t take one of my larger cameras on this outing there were two reasons. First, I was concerned about the potential crowds, headed into London for St. Patrick’s Day. The second was the weather. That turned out to be the bigger of the two issues, as I was hailed on a few times over the course of the day.

Thanks for coming along as I am busy ticking things off my list. Do you make lists like this? What do you think of the photos, do you have a favorite? Your thoughts are welcome below.

As this walk was all over London, so this post is all over my different blogging places.  Added to:

A Photo A Week Challenge: Cityscape/Townscape.

Sometimes it takes me a while to get to a final version of a photograph. This shot below was taken on my iPhone and then in Luminar had a “look” (that is what they call a set of predetermined filters) applied to it. This one was called Victorian Postcard: 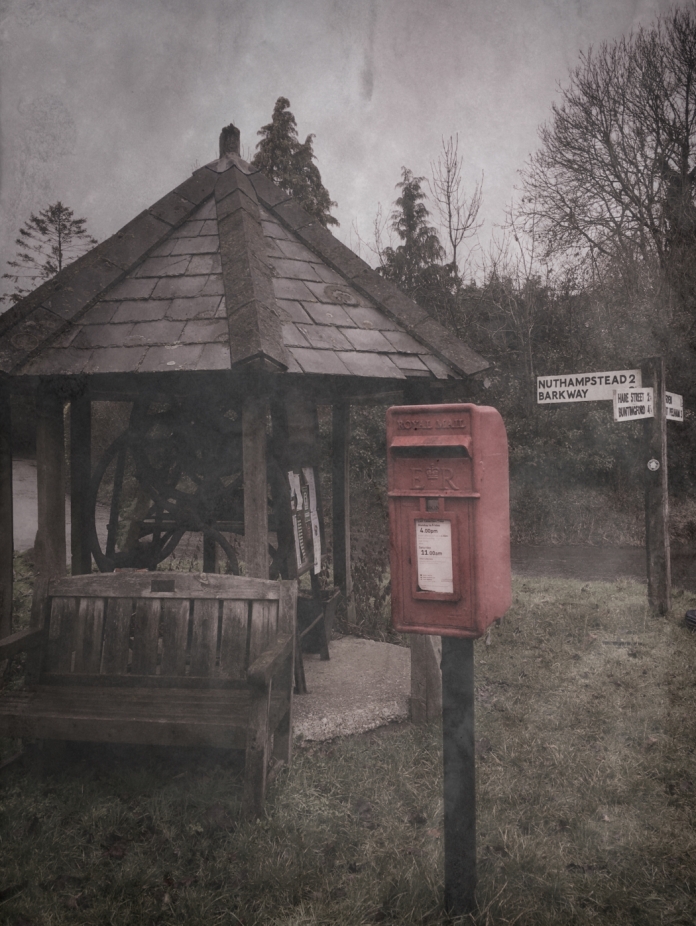 I don’t particularly like it, but I like some of the elements that are in it. I like the idea of a vintage feel for this scene. I’m interested in contrasting that with the red in the postbox. I thought about those ideas, and when I went to edit again, I started with this version:

This was taken on my point and shoot, which has better jpeg quality than my phone, but doesn’t shoot in RAW. The day I was taking this photo was rainy and grey. Rainy enough that I had opted to leave my DSLR camera at home.

I still liked this scene, but you will see in the next version a crop has been applied. There are a lot of things in this image and a crop eliminated some of them. The eraser tool got rid of some of the others like the cones.

But this edit you will see below was really going to be about masking. I’ve applied the Vintage Postcard look to it and then used a mask, to edit back in the postbox. I used this video to get the basics of how masking works in Luminar:

Here is my final version:

Ok, so that’s much better. The main difference is that when I went to mask in the postbox, I used a paintbrush setting with a lower opacity. That helps the postbox blend a bit but still pop out a bit.

In terms of method, I’ll point out that the middle version I saved as a separate file before going back several steps in the edit history and starting off in another direction. I did this because, while I wasn’t crazy about that version, there were several steps like the crop and the erase that I was happy with.  I don’t always do this, but I think it is a good practice.

It was a lot of trial and error to get to this point. I think it was worth it. I like the final image. I also think masking, while a powerful editing tool, can be tough to master, and practice like this will make me better at it. Your comments about my edits or questions about my methods are welcome below.

Are you interested in postboxes in the UK? I am it turns out. So far in my travels here I have a photo of one of all the monarchs except for King Edward VIII. Is there one near you? I’d love to know where you have seen one. Thanks!

Added to One Word Sunday, Red.