In case you thought it was safe to leave the house, my teenager will tell you it’s not: 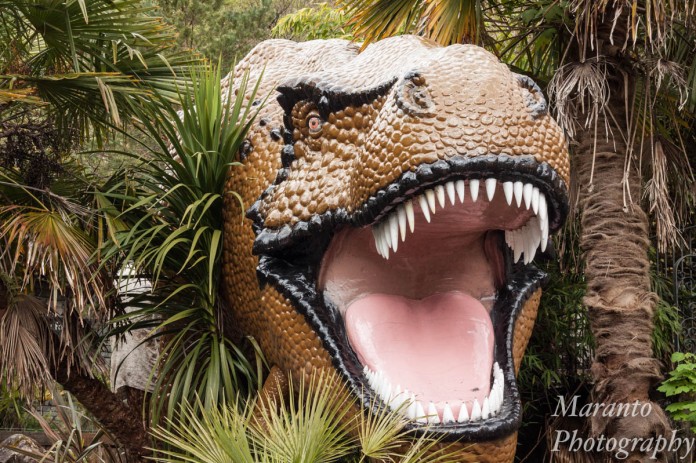 Pictured above, a dinosaur, not my teenager.

This is the terrifying or hilarious sight that awaits you at the entrance of National Showcaves Centre for Wales. It kind of depends on how you feel about dinosaurs. As I was sitting eating my lunch not far from this dino, the reaction was mixed.  Some young visitors were really excited.  Others were wondering what they had done that their parents were punishing them this way. My  teenager was firmly insisting that we walk straight past the dinosaurs to get to the caves and not take photos like this to post to Instagram:

But as my teenager can tell you, there is a danger in leaving the house with your parents.  They are likely to do highly embarrassing things while at the same time making it obvious that they are your parents.  So, what’s a teen to do? Consider these steps:

In addition to providing those helpful tips for dealing with impossible parents, I will talk a bit about the actual photos.  The top photo was taken with my Canon 50D. While I was taking the photo I thought about composition, I wanted the dinosaur to mostly fill the frame. I also considered a few different angles, trying to get as much of the metal fence and shop that was next to the dinosaur out of the photo, so I wouldn’t have to worry about cropping later.  In Lightroom, I sharpened the photo a bit and also did a white balance adjustment.  In this case I just used the eyedropper tool, picked a neutral white spot, and Lightroom made the white balance adjustment.

With the Instagram version, white balance is out the window.  The photo, taken with my iPhone, is more about setting a scene than reflecting the actual scene. What the two photos have in common is my thoughts on composition.  In both of them, I thought about filling the frame with the subject and about keeping later cropping to a minimum.

Also, there were caves, but the dinosaurs were awfully fun to photograph.  Has that happened to you, you go out with the thought of taking photos of a sight, but then get distracted by something else like dinosaurs? There are a lot of ways to manage white balance in editing software, do you have a favorite method? Parents! like what is with them?  Feel free to leave a comment below.