A few weeks ago I was rock climbing in Utah.  Close to the area were these petroglyphs:

These symbols are examples of Fremont Rock Art and date from 450-1300 A.D.  Also close by were examples of Archaic Rock Art dating from 6,000-1000 B.C. and modern graffiti.  Personally, I find the modern graffiti on these rocks annoying, but looking at the Fremont period work, I was wondering if there would have been people in that time who found it annoying that their contemporaries were putting “graffiti” where the older Archaic art was.

This photo was taken outside Arches National Park on Utah Highway 27 near the climbing area called Wall Street.  I was using my 70-200mm lens, but as this example of the petroglyphs were not that far up the rock, the zoom wasn’t really necessary.  I edited this image in Photoshop using curves to make the colors in the rock pop a bit and make the art stand out.

Bonus points to you if you find the critter in the photo.  I also have posted this photo on Flickr.  What do you think of this type of art? do you also like graffiti?  Feel free to leave your thoughts in the comment section below.

I have been in Utah for a few weeks.  One thing Utah has in abundance is beautiful red rocks: 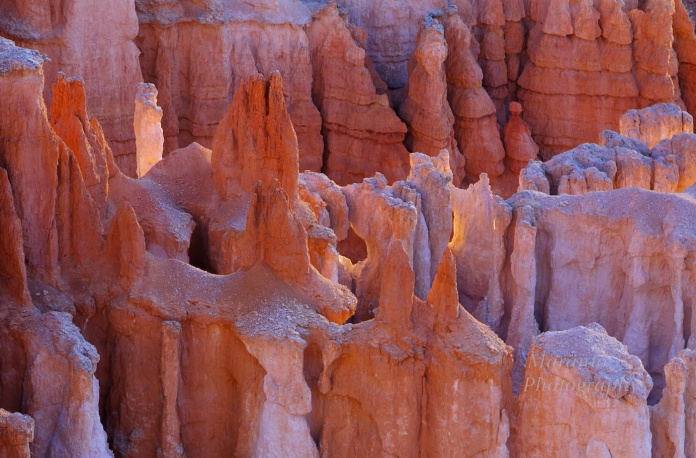 I took this photo at about 6:30am at Bryce Canyon National Park as the sun was starting to work it’s way through the rocks.  I used an f-stop of f/16 because I wanted to show detail in the rocks.  That required a fairly low shutter speed, but I wasn’t too worried about that because I was fairly sure my subject matter wasn’t going anywhere.  The light was the variable, shots taken a few minutes earlier on the same settings were much darker.

I bracketed this photo and when I edited it, created this HDR image in Photomatix Pro.  The individual photos turned out a bit flat as compared to what I was seeing in person.  I think this HDR version above is closer to what I saw.  I was thinking as I was taking pictures that this landscape just looked better in person than in photos.  So after taking my shots, I put my camera away and just stood for awhile watching the sun come up.

Have you ever had a moment like that where you just put your camera down, because you were sure the images wouldn’t do the moment justice?  This week’s photo challenge is Roy G. Biv, the colors of the rainbow.  I love taking photos with all sorts of colors, but I also think that sometimes the rainbow is best experienced without the camera.  What do you think? Feel free to comment below.