I’ve been to a nearby lake a few times in the last few weeks. With my 70-200mm lens I was hoping to get a close up picture of the herons that nest near the lake.  It was not to be, they were all still too far away.  While I was pouting about that, this dragonfly stopped to rest on a branch near the water.  So I took a few photos.  Here is an edited version:

The dragonfly was actually at an awkward angle from where I was or where I could be to get a photo without being in the water.  He stayed for awhile and so I experimented with quite a few settings in my camera which is why this one is a bit of an odd combination of high f-stop, low shutter speed.  This is actually a bracketed photo, so three photos with different exposures that have been merged.  I used Photomatix to create the HDR image. I was surprised at how well that worked considering the slow shutter speed.  The f-stop was high with the thought of getting the detail in the wings, but it got all the background in detail as well which was distracting.

In order to deal with my background, I opened the HDR image in Photoshop as a smart object and then made a second smart object layer.  I desaturated the top layer to about 48 percent and then created a mask and masked in the full color dragonfly and the tips of the branch he is perched on.  I then used and Iris blur to keep the dragonfly sharp but blur the background a bit.  I also used Photoshop to do some cropping. I was going for a bit of a dreamy other worldly feel without leaving reality completely.  Here is the original photo: 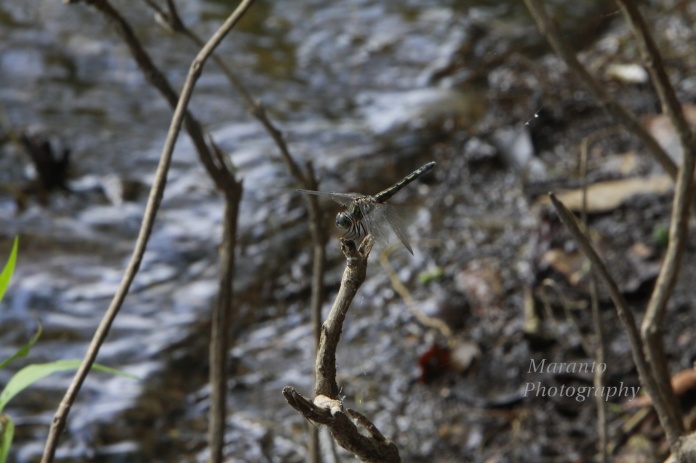 It was several steps worth of editing, but I liked the outcome.  What do you think? feel free to leave a comment below.